RootHack is a place for computer security related people to experiment with their knowledge, learn new things and hopefully have a good time. The idea is to give information security enthusiasts a place to test new measures of security in a live hacking environment, while at the same time providing a legal place for hackers to attempt to compromise various means of security.

We currently have 7 boxes in the wargames suite, All of which are used for different types of games. Roothack has put this together in an effort to generate real content to further information security. While we could have set up honeypots, or used the machines in our own development lab to document and whitepaper things of interest, We decided to try to provide a place where both sides of the industry could benefit.

This site was designed with a lot of plans in mind, most of which will grow with the site as it generates content.

Who is involved with this site?

What is the History of Roothack.org?

Purchased Feb 10th, 2000 by Phr0st as an attempt to have a companion to hack3r.com that hosted the all things connect ezine.

The 2002 launch of *roothack.org was a joint effort between Phr0st and EPiC. Since roothack.org had never really been used and its name seemed to represent everything the hack3r.com wargames stood for it was decided it would be the home of the wargames. The banner at the top of this page represents the joining of the two sites around the central theme "Wargames". It took just one weekend in February 2002, in EPiC's basement to get the site and the first 7 boxes up and running and the games open for play. 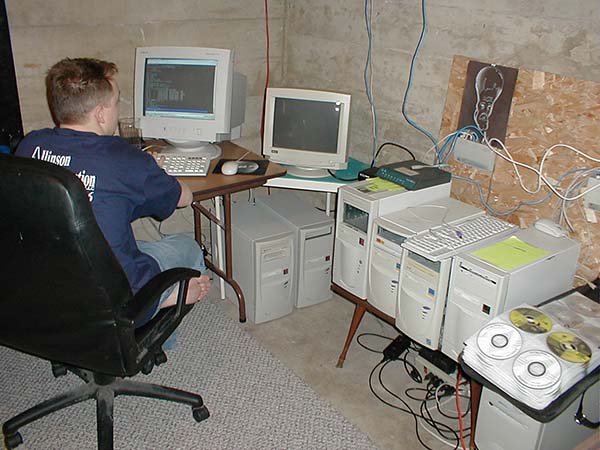 Epic working on the 2002 suite of wargames.

* The original design is what this site currently is paying homage to. The styling logo, and menu setup are exactly how they were when it launched in 2002.

The 2007 solo wargames were developed by EPiC, Ocyrus, s0kket and others and were used to train developers at the Novell Inc. Headquarters. This consisted of servers that were launched inside Novell's offices which had an open box and a main box that had levels *1-9 on Erinys and Erebus had 10.

* These are the levels that are now playable. They remain almost exactly as they were text and all, the only things that were changed were the flags, passwords and the last two lines to help continue the flow from level to level.

Ocyrus, Dbag, eps and s0kket launched Roothack.org sirens with levels 1-20 from development continuing after the 2007 games.

There will be a historical archive of all of the sites here in the future. All of the work on Roothack.org over the years has been exceptional. There is a lot of passion around the wargames, and especially around continuing EPiC's dream.